We are really kicking our 60 Second Interview series into the next gear with our latest edition as we feature the reigning Olympic and European Team Pursuit Champion and Commonwealth Games Individual Pursuit Champion, Joanna Rowsell Shand.

Having watched and read a great deal about Joanna over the the years, from her World Championship exploits to her most recent success at the Rio Olympics, we felt it was about time we and our readership learned a little more about what makes this Surrey girl tick.

See what Joanna had to say in our Interview with the Vamper: 60 Second chat.

Joanna, who or what inspired you to ride? How did you get into cycling?

I started cycling back in 2004 having been talent spotted by British Cycling. They came to my school and carried out some basic tests on the playing field which involved a sprint across the field and an endurance test which was 6 laps of a 200m circuit. Interestingly, I wasn’t actually the best at my school but I was good enough to be invited back for further testing. The next stage of testing was far more scientific – on turbo trainers using bikes equipped with SRM cranks – and it was here that I really excelled, producing good peak power and also a good 3 minute test.

Following this I was given a place on the South East region Talent Team. They gave me two bikes – a mountain bike and a cyclocross bike (which could double up as a road bike by changing the tyres) and some basic kit. We had a training camp over a weekend once a month and each month would try a different cycling discipline. That summer I enjoyed watching the Athens Olympics and was particularly inspired by both Chris Hoy and Bradley Wiggins and loved the look of racing on the track.

What is the best thing about being a professional cyclist – and what is the worst?

The best thing is that I get to keep fit and healthy for a living and I get to spend many of my days outside in the countryside. However, there are also many days in the middle of the summer when the weather is gorgeous and we are stuck inside the velodrome or the gym. And many days in the winter when it is cold and wet but there is a four-hour ride on the planner.

However, the worst thing I would say is trying to constantly avoid illness and how this takes over my life. You never want to miss a day of training and a cold, chest infection or the flu can really set you back. I seem to have a particularly weak immune system so especially in the build up to major competitions or during a very hard training block I will be using antibacterial hand gel and wipes and avoid things like shaking hands or even touching door handles. It takes over my life, but it is necessary as I am so susceptible – especially when I have been training so hard. When I retire I will definitely be the opposite – there won’t be a hand gel to be seen!

Does your heart lie on the road or on the track?

When it comes to training my heart lies on the road. I love exploring the countryside and I don’t enjoy training on the track at all. I feel like a hamster in a wheel! However when it comes to racing I far prefer the track. I love the noise of the crowd, the butterflies when I hear the countdown beeps, and the motivation to break records.

Tell us about your current favourite ‘off-track’ or road ride: where do you like to go? Which bits of the country/world?

I love training in Lanzarote as the roads are lovely and smooth and the weather is warm all year round. However, my heart will always lie in Surrey which is where I am from. I used to stomp up Box Hill on a daily basis back before cycling was popular and it was our little secret. When I first started cycling if I saw another cyclist out on the roads it would be worth telling people when I got home as it was so rare. Now Surrey is heaving with cyclists, which is brilliant to see, and my favourite roads will always be in the Surrey Hills. 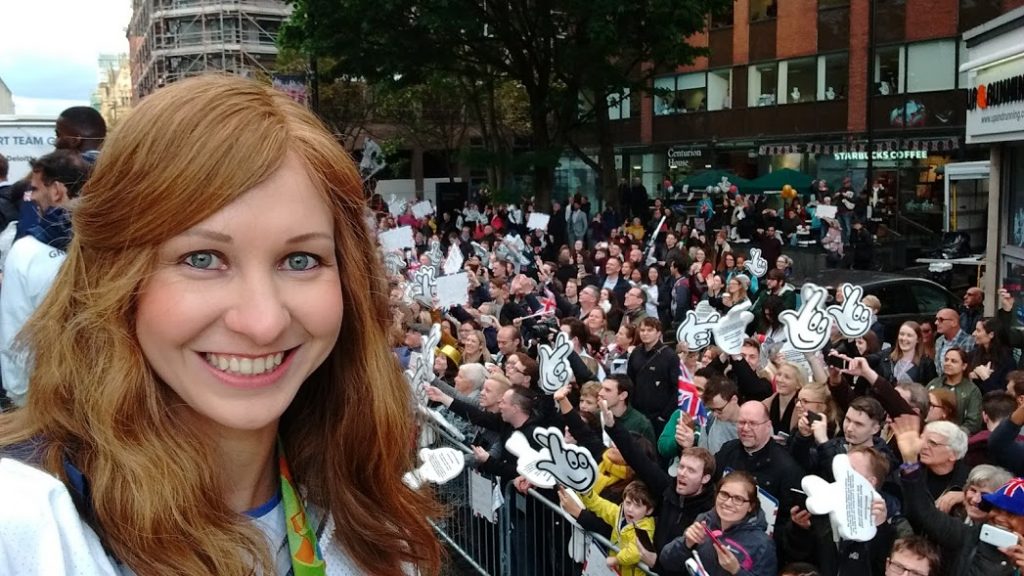 Which of your cycling achievements are you most proud of, and what do you most want to achieve in your career in the future?

This is a tough one! If forced to pick, I would choose my Commonwealth Games gold medal for the Individual Pursuit in Glasgow 2014. As this event was removed from the Olympic programme, to me the Commonwealth Games were like my Olympics for that event. Earlier that year I had won the individual World Title but to then back that up with Commonwealth gold was very special.

The one thing missing from my palmarès is an individual Olympic gold. The Individual Pursuit was the event I was originally talent spotted for so I would love for that to come back in to the Olympic programme for Tokyo as it is a classic and pure event in my eyes. If it doesn’t, it’s not the end of the world – I have had a pretty good run with team pursuiting!

When you’re not training, how do you enjoy spending your time?

I love going out for food and trying new independent restaurants. I enjoy watching films so I can often be found at the cinema, which is about as exciting as a night out gets as an athlete when training! I am a fan of the Harry Potter books and grew up reading them (the first was released when I was 8 and the last when I was 18) so I was very excited recently to see the new Fantastic Beasts film. I far prefer the Harry Potter books to the films so it’s a shame we couldn’t have read the story rather than just see it on the screen. Although I am not complaining – I am very glad JK Rowling is writing more stories for us.

I also love to travel so when I have time off the bike and no other commitments I like to plan a trip to somewhere I have never been before, even if it is somewhere in the UK. I enjoy travelling by train and if I have just a weekend off it is nice to have a change of scenery and see somewhere new.

Fitting in nicely with enjoying travelling, I also love to take photos. Wherever we go I will be searching for the perfect sunset shot or waiting for the right light to capture a new sight. My Instagram is an interesting mix of views, sights, my cat Charlie and a few selfies!

If you could go for a bike ride with anyone at all, dead or alive, who would it be and why?

JK Rowling – so I could question her in depth about the wizarding world!

What is your favourite piece of cycling kit, and why?

I love my Wattbike! I am now sponsored by them but even before that when I first started using one I was amazed at how much better it was than a normal turbo trainer as it felt so much more like riding an actual bike. As a track rider I do a lot of specific training sessions and the Wattbike makes this aspect of my training so much better.

What three tracks are guaranteed to get you fired up for a ride, no matter what?